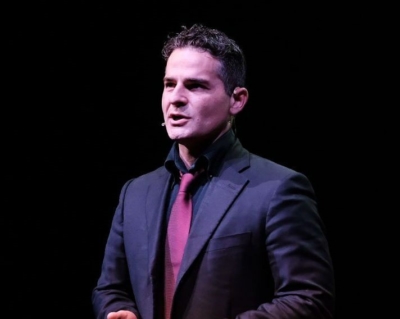 He attended the Faculty of Mechanical Engineering in Rome, in 1999 he presented the Italian University at the Aerospace platform of Le Bourget (Paris) on the occasion of a meeting focused on new aerospace technologies.
In 2001 he was hired as a Junior System Engineer by TeleAp S.p.A (today NTT DATA Italia).
In 2003 the first responsibilities came as Technical Manager, while in 2004/2005 he was entrusted with the role of Team Leader.
In 2008 he left the position of employee and began his career as an entrepreneur by founding his first private research center called Mayam.He started working on issues related to Artificial Intelligence, Automotive, Security, IoT.
In 2012 he won the Lamarck Award for Innovation thanks to the Human Language Code Leonardo, the first intelligent software developer created with AI algorithms.
In the same year, Marco Menichelli began to reflect on the true nature of an artificial “intelligence”. An intelligent person does not need too many explanations to understand, he uses the intellect to transpose his knowledge into new contexts that may never have been addressed before, so why does AI need all these instructions? Software that needs too much configuration work cannot be called intelligent.
In 2013 he therefore began to study a way to emulate human cognitive processes by creating a very advanced Virtual Assistant called Leo.

Leo was able to understand and execute multiple commands, and the application in the Smart Home field, has performed infinite commands in a single sentence, created the scenarios and rules. It was on Leo that Marco Menichelli began an experiment of the Deep Seensing methodology and it was on Android that the first version of XSENSE was born.

From 2015 to 2019 he joined silicondev SpA for the development of a new version of XSENSE taking advantage of the knowledge acquired over the years of research and development.

Over the years he has had the opportunity to collaborate with the most well-known multinational companies on other aspects related to technological research.

In 2017 he theorized the functioning of the human intuition (outgoing publications) and he start to work in the fields: Cyber Security, Defense and Intelligence.

In 2019 he theorized the Synthetic Psyche on which he began to work, with the role of CTO, in SyntLife Corp and a Scientific Board composed of a worldwide relevance.